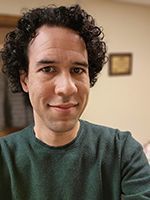 Jon Gilgenbach's educational path saw him graduate with International Baccalaureate honors from J.I. Case High School in Racine, WI.  He then went on to college at Southeast Missouri State University in Cape Girardeau, MO.  His varied interests led to a wide range of courses taken, and he settled on a Bachelor's Degree in Mass Communications, with a focus on video production.  After working for a television news station for two years, Jon returned to Milwaukee.

Jon's connection with the Adult Learning Center began in 2003, when he was assigned to the center as a teacher for one year through Public Allies, an AmeriCorps program.  Following a successful and rewarding program year, he was hired directly by the ALC and has remained with the organization since that time. After 15 years of working closely with both of the previous directors, Jon took on the role of Executive Director in December of 2018.