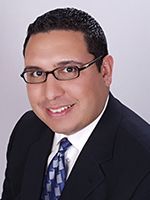 Oscar Tovar is currently the Staff Assistant for the Mayor of the City of Milwaukee. Oscar implements aspects of public relations, community outreach and constituent services to ensure positive and effective liaison services between the Mayor’s office and citizens of the city. He organizes, staffs and briefs the Mayor at public and private meetings and events throughout the city. He also serves as an Ambassador for the Mayor in the community in order to effectively represent the Mayor and his office. Oscar also serves as the Hispanic Community advisor to the Mayor on all concerns and issues that are affecting the Hispanic Community in local, state and federal legislation and laws.

Prior to working for the Mayor, Oscar was appointed by Governor Jim Doyle as the Southeastern Deputy Director for the Governor’s Milwaukee office. In this role, his office was responsible for overseeing the Southeastern part of the State covering seven of the largest counties in Wisconsin; Milwaukee, Racine, Kenosha, Walworth, Waukesha, Ozaukee and Washington counties.