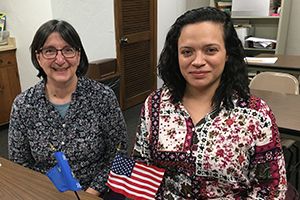 Please allow me to introduce you to Xochitl (pronounced “SO-chill”), a learner, advocate, and employee of Literacy Green Bay. Most importantly, Xochtil is a great example of how small steps can make a big difference.  Xochitl came to the U.S. in 2009 with her husband and their 2-year old daughter.   She soon began attending classes at Literacy Green Bay. Her primary motivation to learn English was her daughter:  Xochitl wanted to be able to read to her daughter in English, to help her in school and to attend events at her daughter’s school.  “Some families make the children grow up really fast because they are the only ones who speak English.  I didn’t want that for my daughter.  That was one of the reasons I started learning English.”

Xochitl started studying English in the Level 1 class.  Little by little, step by step, she advanced to Level 3.  She took a small but necessary step each time she came to class, each time she did her homework, each time she practiced English outside of class.  These small steps added up to big accomplishments for her.  In April of 2013, Xochitl was matched to a first-time tutor, Sue, and continues to meet with her twice a week.  According to Sue, their tutoring partnership has been a learning experience for both of them “The tutor learns as much as the student sometimes!”

Originally, Sue was Xochitl’s only resource to practice English.  Even though she had advanced greatly in her language skills, her confidence in her ability to communicate in English was lacking – she continued to rely on an interpreter for any appointments she had.  One day however, her daughter was sick and Xochitl needed to bring her to a doctor.  She was able to schedule an appointment, but an interpreter would not be available on such short notice.  Since her daughter’s health depended on it, she agreed to try the appointment without an interpreter.  To her amazement, she was able to successfully explain her daughter’s symptoms to the doctor and also understand his recommendations for her!  This was the first time she relied on her own abilities to communicate in English – and it was a success!  It is a day she remembers vividly and one she is not likely to forget!

With this boost in confidence, Xochitl began attending events at her daughter’s school.  She was able to meet her first goal of helping her daughter, both in and outside of school.  More recently, she has met several other goals – she and her husband are the proud owners of a home they just purchased in Ashwaubenon.  Another very exciting accomplishment for Xochitl is that she is a new U.S. citizen, as of October, 2018!  In addition to these achievements, Xochitl obtained employment as a Child Care Teacher in Literacy Green Bay’s ELEvate Family Literacy Program.  But she is not stopping with these goals - Xochitl is also enrolled in the Paraprofessional program at NWTC, aiming to earn her Associate’s Degree.  We are so proud of Xochitl and all of her accomplishments!  Xochitl is living proof that small steps truly do make a big difference! 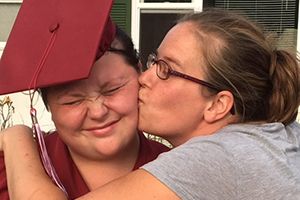