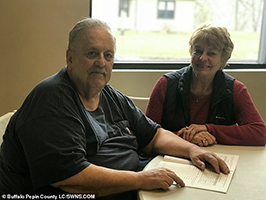 Lonnie Breitung accomplished many goals in his life.  He worked as a farmhand, welder, and machinist and is the proud grandfather of four.  Yet, one goal that remained unachieved was the ability to read.  But in November of 2017, after encouragement from friends and neighbors, he sought out help from the Buffalo Pepin County Literacy Alliance and became not only literate but also the 2018 ‘Learner of the Year.’

He now relishes in his new pastime and just finished his first ever novel, Little House in the Big Woods by Laura Ingalls Wilder.  “Unless the football's on and I’ve got to watch, I like to read in the evenings. It gets my mind motivated,” said Breitung.

It was with the purpose of necessity that Breitung came to Buffalo Pepin County Literacy Alliance as his low literacy proved to be a great burden in his life.  It was a struggle for him to understand bills and for years his ex-wife would handle them.  He relied on friends to fill out forms for him, couldn’t recite the alphabet and failed his driving test as a teen because he couldn’t read the theory questions.  With the help of a policeman who read the questions aloud, he finally passed the exam at the age of 62.

For more than five decades Breitung hid his low literacy.  It may seem unfathomable for some but for the 1 out 5 Americans who have low literacy it is a common reality.  According to the Learning Disabilities Association of America, children who lack basic reading skills may be allowed to fail for two to three years without effective intervention.  Unless these children are noticed at an early age and taught how to read they may be passed along in school until basic reading instruction is no longer available.

This proved to be the case for Breitung.  “When I started class I had a third or fourth grade reading ability.  All I needed was a little push…nobody’s dumb, they just ain’t learning right. Kid’s never had help in my day,” said Breitung.

He now aims to get a junior high or high school level of reading.

Lonnie’s tutor Mavis Kjarland, who has taught English for 25 years, recognizes the experience of young learners who struggle to read.  “Kids like him got pushed through the cracks because there was no system to help them,” said Mavis.

In addition to the challenges he faced in school, he also had to overcome the stigma associated with low literacy.  “You’d be surprised by the number of people that shun you for not being able to read,” said Breitung.

However, ever since he started working with Kjarland things have started shifting.  “He didn’t have much self-confidence before, but now he’s volunteering in the community and getting around people.  He’s excited about learning, especially when he gets better.  He has really got a lot more self-confidence” said Kjarland.

Breitung has noticed things changing too.  “Before, I felt ashamed because I wasn’t able to read.  Now that I can read, I’m more confident, though I don’t want to brag.  It’s not like I’m running around telling everyone but I’m a little bit proud of myself,” said Breitung. 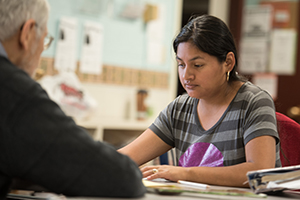 Our member's literacy programs are designed to provide much needed services in their communities. Find a program near you. 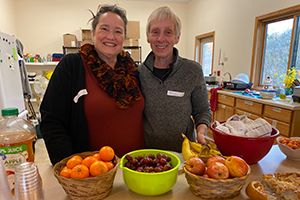