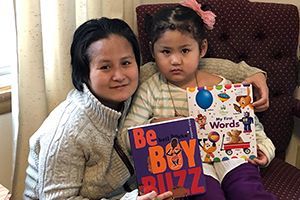 In July of 2019, two little girls squealed and chased each other around their mother Sunday Paw. She smiled down at them fondly and turned her attention back to her studies and her tutor Deborah from SS Michael and Rose Literacy Program. Only two weeks earlier, Sunday had her third daughter, now cradled in the arms of her husband Soe Min. He fed the content newborn while Sunday studied.

Sunday didn’t want to lose the momentum to her citizenship studies, but she didn’t want to be too far from her newborn. Two-year-old Julianna and five-year-old Eh Soe Paw  clustered around their mother when they weren’t chasing each other and watched her study. Deborah handed the girls something to occupy them and they ran off squealing again.

Their childhood was different from Sunday’s own. She was born in a refugee camp in Thailand. As soon as she could walk, she was expected to do chores like carrying fresh water in a pail with the rest of her family. There weren’t a lot of opportunities for schooling.

In 2012, when she was 20 years old, Sunday immigrated to the United States. She married Soe Min in 2014. She and Soe Min studied with Deborah from a book called From Home to School: Stories and Activities for Parents. The book had an accompanying recording so Soe Min, who is blind, could sit and listen to the lesson. Sunday would follow up with a citizenship lesson.

On March 5, 2020, Sunday Paw became a U.S. Citizen, attending the oath ceremony at Milwaukee Area Technical College (last group in-person), and voted for the first time. This last year she helped her two daughters with their virtual classes.

Sunday’s example inspired her children. Eh Soe Paw, her oldest daughter now in second grade, is an excellent reader. Julianna, now a 4K student, insists on reading independently even though she is just now learning her letters and numbers. Sunday wants to read to her, but Juliana insists on reading by herself, creating a story to go along with the pictures.

Sunday shared that “she tries very hard.” Just like her mother.