What are We Even Talking About: Seven Observations on the Art of Communicating Science 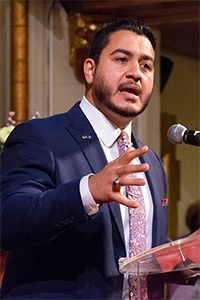 Dr. El-Sayed reflects on his experiences as a physician, scientist, former health commissioner, podcast host, and CNN commentator to share key insights about the challenges and opportunities of science communication as they apply to the pandemic.

At 30, Dr. El-Sayed served as Detroit’s Health Commissioner, making him the youngest health official in a major American City ever. As Health Commissioner, he rebuilt Detroit’s Health Department post-privatization during the city’s municipal bankruptcy.  He led the Department to multiply city funding for public health tenfold, attract millions of dollars in grants, and become a national leader in public health innovation. Prior to his work in public service, Dr. El-Sayed was a tenure-track faculty member at Columbia University’s Department of Epidemiology; Director of the Columbia University Systems Science Program; and co-Director of Global Research for Population Health. He graduated with Highest Distinction from the University of Michigan. He holds a Doctorate in Public Health from Oxford University, where he was a Rhodes Scholar, as well as an MD from Columbia University.

Wisconsin Health Literacy is working with a patient advisory council to design easy-to-read medication labels.  Our work has impacted over 4 million prescription labels in Wisconsin.

Read more about this project.

The Health Literacy Summit is the largest in the Midwest.

Diverse sessions and networking opportunities provided attendees with the opportunity to learn more about health literacy.